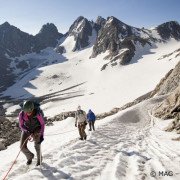 GANNETT PEAK (13,809′ or 4,209 m) is the highest point in Wyoming and known to be one of the hardest fifty state high points to summit. The difficulties in climbing this peak start with the long approach and the heavy packs. The shortest of those approaches is to come in from the small town of Crowheart on the Wind River Reservation from which you can gain access to the Shoshone National Forest.

Gannett Peak is also the highest point in the Greater Yellowstone Ecosystem as well as the highest peak/point in the Rocky Mountains outside of Colorado as is the case it is often sought after for its summit, but what about the path getting there?

Gannett is situated deep in the heart of the beautiful and rugged Wind River Range, a mountain range in and of itself centered in one of least populated states in the US. Thomas Turiano describes it well:

“Perhaps the greatest of all the mountain ranges in Greater Yellowstone, there is a magical quality about the Wind Rivers that charms and energizes all who explore them. Other ranges such as the Beartooths, Tetons, Madisons, and Absaroka invoke a similar mystical affection, but none have had such far-reaching effects as the Winder Rivers”.

It is through this glorious wilderness that one must pass to get to the summit of Gannett Peak. One approach to get to Gannett Peak begins in the tiny town of Crowheart, Wyoming (pop. 141) on the Wind River Reservation (Shoshone and Arapaho tribes). There is a small general store that has the basic grocery amenities as well as native crafts, fishing tackle, ceramics, and gasoline. Here you can arrange permission and transport across the reservation. Alternately you may elect to come in from Dubois, which would add some 20 miles to your trip or come in from Pinedale adding another several miles and a longer summit day. 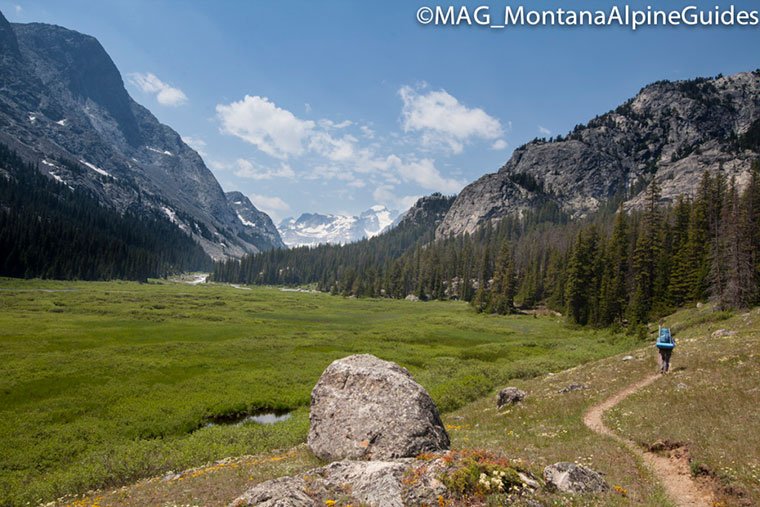 Headed up stream in Floyd Meadows toward Gannett Peak

Photo 1: A view of the north side of Gannett Peak on the approach from the Cold Springs.
Photo 2: Hiking near Dinwoody Creek with Gannett Peak in the distance.

Once arranged in Crowheart climbers will load up for a truck ride across the reservation on rugged dirt roads gaining around 1,000’ to arrive at Cold Springs trailhead around 9500’. From here the approach to Gannett begins on faint to non-existent trails that meander in and out of forests and alpine meadows. Route finding in this section can be quite difficult as the trail disappears entirely only to reappear several hundred yards away. Eventually if you are a savvy route finder you will make it to “Scenic Pass” (~11,000’). From here you will get commanding views of the Winds River Mountains and soon your first glimpse of Gannett Peak. A long contour will take you past the Ink Well Lakes then back in to the forest and eventually dropping elevation to join the Dinwoody Trail. From Dinwoody you get commanding views of Gannett Peak’s north face and the post-card-worthy vibrant green meadows and aqua blue meandering waterways below. Once in the meadows, you can easily follow the trail for several miles fording streams to make your way toward Gannett Peak. The meadows soon close out and its back in to the forest connecting insipient trails with stream crossings. A steep gain in altitude and you are leaving the forests and tree line below in exchange for the alpine arena of exposed granite walls, jutting alpine ridges, glacially polished streambeds, and alpine flowers on the border of the terminal moraine of Gannett Peak’s Dinwoody Glacier. 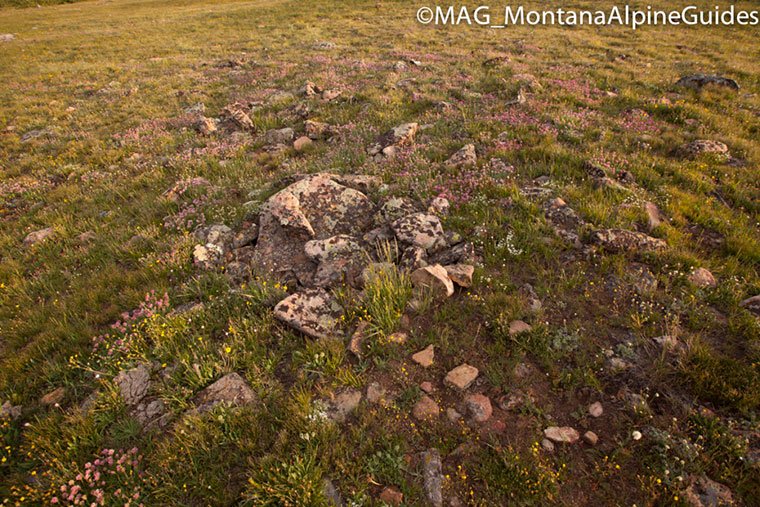 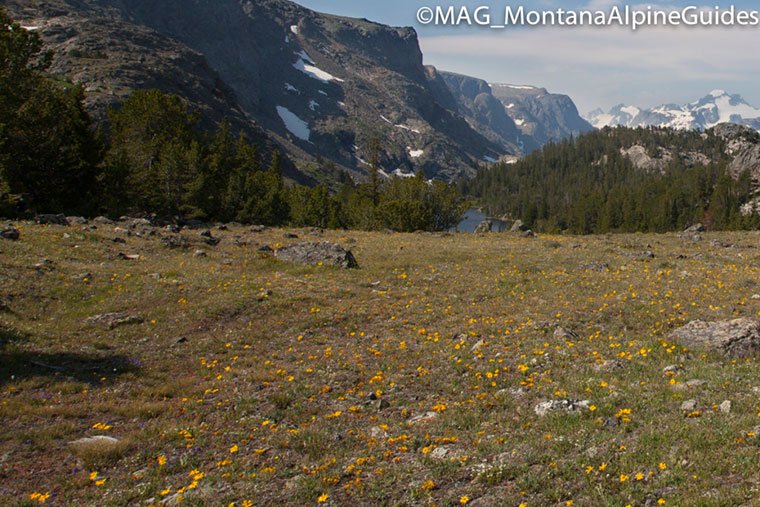 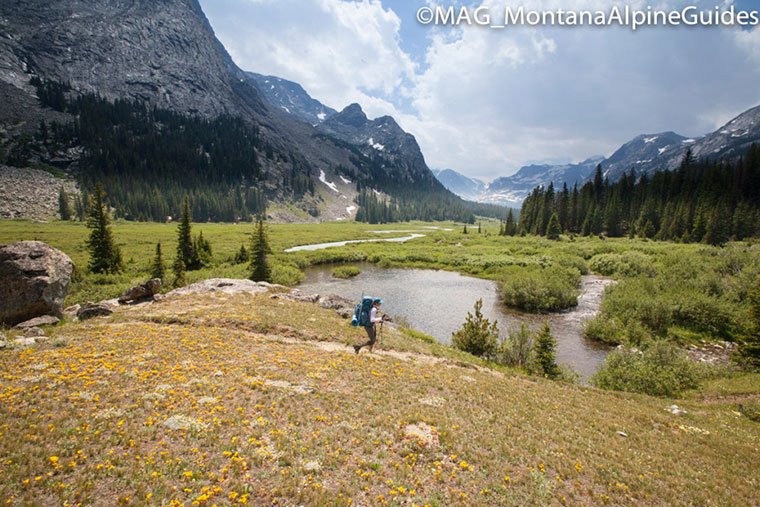 Photo 1: Wild flowers in full boom on the approach to “Scenic Pass”
Photo 2: View of Gannett Peak and Echo Lake
Photo 3: Strolling along near Dinwoody Creek and adjoining stream with Gannett Peak in distant storm.

An alpine start the next day may award you with a view of the east face of Gannett Peak bathed in vibrant oranges and pinks from the morning’s first light. From here the ascent route up the infamous “Goose Neck” and the snowfields above is visible. The slopes soon steepen and traveling as a rope team is advised. The route continues up steep snow slopes to gain the southeast/south ridge, then scrambles on exposed rock to eventually regain the exposed snowy south ridge with magnificent drops on both sides. From here it is a steady climb to Gannett Peak’s lofty summit. This route involves technical snow climbing, a bergschrund crossing, rock scrambling over exposed terrain and steep snow travel as a rope team. Most people utilize ropes, pickets, rock protection, and belays whenever necessary. With technical knowledge, gear, good fitness, determination, and weather you should be able to arrive at the summit Gannett Peak offers incredible views of the Wind River Range, The Tetons, and Granite Peak among other mountains. As always keep an eye out for the all-too-rapidly forming afternoon thunderstorms. 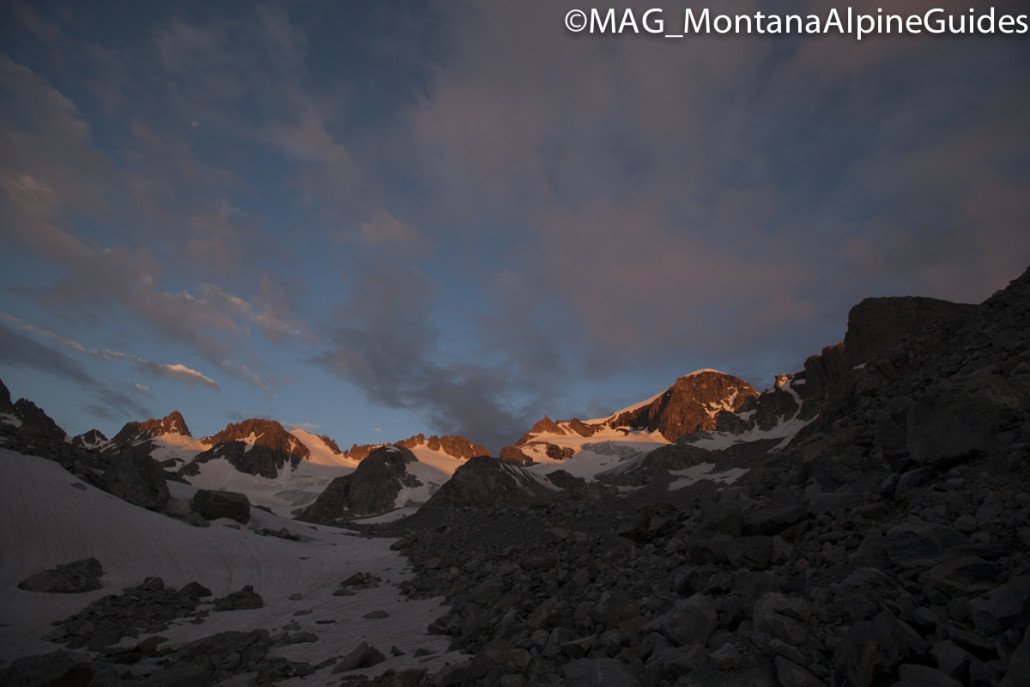 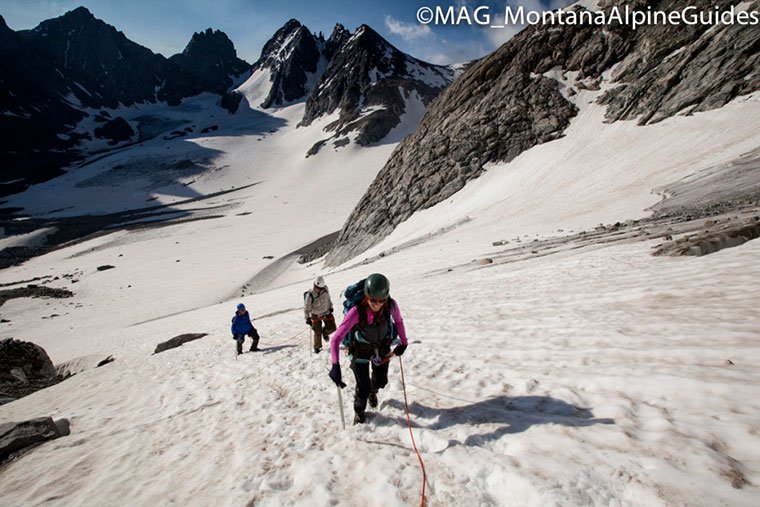 Photo 1 : Dinwoody Glacier and Gannett Peak at sunrise
Photo 2: The initial steep section on Gannett Peak’s east slopes
Photo 3: Descent and view in to the southern Wind Rivers
Photo 4: Hiking out after a successful summit on Gannett Peak

To find out more go to: http://www.mtalpine.com/mountain/gannett-peak/#top